Why I Chose to Become an Olympian and Skeleton Racer

Why I Chose to Become an Olympian and Skeleton Racer

As a kid with hopes and dreams bursting at the seams, I never could have imagined I would end up achieving them.

I grew up in Ghana, spending most of my time with my grandma Minka who often told me, “Akwasi, what you need for success is already in you. It’s a matter of believing in yourself having the will to work hard and never give up.”

I had great aspirations but I just didn’t know how I’d achieve them. During my childhood, we didn’t really have the resources needed to develop a hobby like organized sports. In fact, I didn’t start participating in sports until I was 15!

Sounds unbelievable, doesn’t it? That’s just how it feels; life’s a whirlwind of unexpected twists and turns.

The Start of a Lifelong Dream

When I moved to the Netherlands at the age of 8, a whole world of new experiences opened up to me. This was when I was introduced to sports.

I started my sporting career by doing track and field. Instead of running from my past, I embrace it. It’s what drives me to keep pushing myself. Being granted an athletic scholarship at the Utah Valley University, I ran for my college team’s 100 meter, 200 meter, and 100 meter relay teams.

At the age of 17, I became a Dutch Junior Champion in the 200 meter sprints.That’s when my Olympic dreams began.

Making the Switch to Skeleton 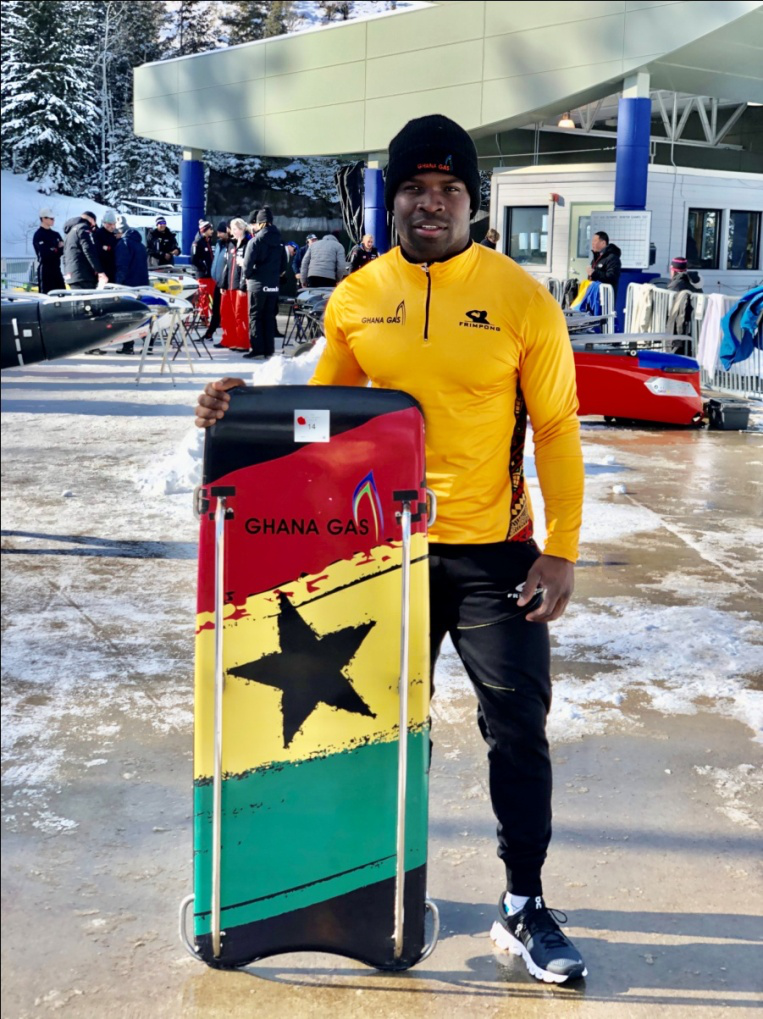 After success as a track athlete, I realized I wanted to achieve bigger and more ambitious dreams. With encouragement from my wife and coach, I changed my sport from track and bobsledding to skeleton.

Ever since it’s return to the Olympics in 2002—and even before it—no black male, African athlete had competed in the skeleton sport. The thought of a black male African competing in a winter sport was criticized by many and I was met with inquisitive concern throughout.

That’s what motivated me to strive even harder.

My goal is to represent my country—Ghana—and my continent—Africa—and bring hope to the billions of people there. I want to be the Hope of a Billion.

I came a step closer to my dreams when I participated in the skeleton sport at the 2018 Pyeong Chang Winter Olympics. But I won’t just stop there.

In achieving my dreams, my aim is to enable the dreams of others. Whether you want to be a lawyer, teacher, or take on an unconventional career such as becoming an Olympian, it’s within your reach.

I chose this sport so I could turn the obstacles into opportunities—for myself and millions of people all over the world. Donned in Ghana’s colors, I want to inspire you to triumph over whatever you’re struggling with—even if others tell you it’s unrealistic.

No dream is too small or too ambitious; that’s why I’ll keep striving until I reach the very top. I plan on winning a medal for Ghana and Africa at the Beijing Olympics in 2022. I’m an athlete, entrepreneur, motivational speaker, and loving husband and father.

If you want to learn more about me or who I am as an athlete, you can follow my journey here.

About the Author: admin